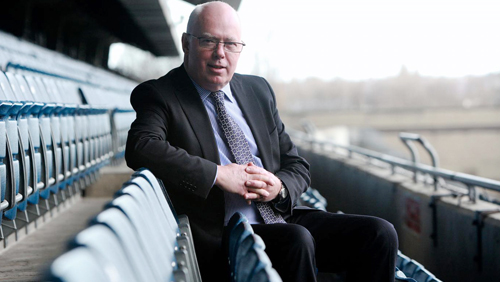 BECKY’S AFFILIATED: HOW “SPORTIFYING” POKER WILL INCREASE ACCEPTANCE AND POPULARITY WITH PATRICK NALLY

The gambling industry has seen a number of initiatives to “sportify” poker but the question still remains if any of the attempts will succeed.  We’ve heard from Alex Dreyfus of the Global Poker League on his plans to grow poker’s popularity worldwide and now Patrick Nally of Match Poker is entering a similar arena.

Match Poker is a “team sport” based on Texas Hold’em, but in this case, team members are split onto different tables, with one player from each team placed in the different seat positions.  Tables are dealt the same cards via mobile devices, meaning every player in seat one has the same cards and the same goes for seats two, three and so on.  After every hand, the chip count for each team is tallied and points are allocated, the stack is re-set and the next hand begins.  The team with the most points at the end is the winner, making Match Poker a true game of skill as the elements of chance are eliminated. Poker as a spectator sport is a concept yet to be proven, but Nally who has years of experience in sports marketing believes the opportunity for Match Poker is huge.  To find out why he feels so strongly, I spoke with Nally about Match Poker and brought up some issues likely crossing the minds of skeptical poker enthusiasts.

Becky Liggero: Thank you for joining me today, Patrick.  People say the poker industry as we know it is dying…why do you think the future is so bright for Match Poker?

Patrick Nally: Match Poker is a new and exciting variation to conventional Texas Hold’em. It allows a player’s true skill and ability to shine through the duplication of cards and format of this variation. However one of its strongest selling points is the acceptability Match Poker receives from governments and official sports recognition bodies around the world. This allows us to access markets and territories which have previously closed itself off to Texas Hold’em due to its dominant association with gaming and gambling.

Match Poker is also played on mobile phone devices. Mobile penetration and mobile use around the world is staggering, while mobile games, as a sector, is also rapidly growing. By raising funds to expand the software capabilities, the popularity of Match Poker as a mobile game, with real ‘bragging rights’, will help rekindle the poker boom but away from gambling.

BL: So lets assume Match Poker is a great success. How do you envision this success impacting the more traditional poker industry?

PN: Match Poker success will directly impact the poker industry as a whole. Not only will it attract more players from all corners of the world but also help detach poker from the restrictive ‘gaming and gambling’ association is has formed over time.

Match Poker’s image and acceptability will change people’s perception of poker being a game of luck with stats and analysis to prove it is indeed a mind sport and game of skill. The ability to access your ranking against all different groups will create greater competition and therefore greater participation. It also allows young people (under 21) to participate in a skilled Mind Sport, via their mobile, without legal restrictions.

BL: What plans do you have to increase awareness of Match Poker across the globe, especially in territories of high potential such as China?

PN: On the basis of a successful ‘fund raise’ we have created a global rollout plan for the launch of Match Poker, which includes tapping into highly populated nations that have a large youth population, and combining the resources of local media partners and leading sports marketing agencies with our well- established national federations. We will launch into a number of European nations this year and then start marketing in major markets like the China, the US, Russia, India and Brazil.

Collaboration with major technical providers and social gaming organisations is another avenue we are exploring that relates to the launch of Match Poker. Creating a structure whereby individuals and teams can compete for sponsored prize pools, not made up of their own buy-ins, just like any other professional sport where the best athletes, by skill, can win their way into a world, regional or local championship event.

We estimate that we will have two million paying subscribers by 2020. BL: Wow, that’s an aggressive number.  Clearly appealing to the younger generation is key, how are you using technology to attract millennials?

PN: With the growth of online poker we have seen more and more young players enter the world of poker, with a few of them even turning into extremely skillful players able to take on the ‘older generation’. With the Match Poker offering being constantly available for play via a mobile and by also using smartphone in live settings, we think it will be an extremely attractive feature for the younger tech-savvy generation of new and excited poker players.

Additionally, digitalising the cards and gameplay offering allows us to record every single action made while collecting immense amounts of data which we can then use to churn out very interesting statistics and analysis of the hands just played. The opportunities and variations on how to assess ’skill ranking’ provides a limitless ability to create Match Poker communities.

BL: Ok, and now a few questions to appease the skeptics.  The method of having the same hands dealt at all tables was used in the 1800’s and is still used in all bridge tournaments. Although there is a much higher skill element in bridge, this still has not attracted any big money to the sport. Why do you think poker would be different?

PN: As playing statistics will confirm, poker is a much more attractive game when compared to bridge. Even though bridge has all the acceptance regarding Mind Sports and games of skill on its side, it hasn’t been able to gain popularity, especially with the young. Poker is young, sexy, attractive and very appealing to a very large part of the population. The demographics are appealing to sponsors but sponsors would prefer to be involved in a non-gaming/gambling activity. Poker already attracts big money, even if it is by way of players buy-ins.

We are creating a structure that allows skilled players who haven’t wanted to commit $100K buy ins, to compete with the Iveys and Negreanus of this world. They can now qualify to represent their nation at an international IFP event, and play against other national representatives for a sponsored prize pool. The overall structure of Match Poker makes the offering very attractive to both sponsors and broadcasters.

BL: Money management and the ability to play your best even though a lot of money is at stake have traditionally been two skill elements that differentiates the best poker players in the world from the rest. If you take that out of the picture, is it still poker?

PN: As mentioned above, even though players would not be playing a ‘cash game’ and ‘buying in’ to the events they could still be playing for a sponsored prize pool. They are still standing to win a large amount of money by winning the event and playing their best.  Similarly in other sports, players are under immense pressure for hours while actually participating and always strive for excellence even if they haven’t staked their own money to participate.

Professional sport is about rewarding the most skillful players for proving their skills and abilities, without participants buying their way into events and creating their own prize pools. We have had very positive reactions from players that attended our European and Asian Nations Cups – they did not put up any money to play and in this instance were not even playing for a prize pool, simply for the pride of their nation and medals or trophies. It’s amazing what national pride along with a sponsored prize pool will do for poker.